Windows 10 IoT Enterprise is an operating system specifically designed and optimized for medical devices, automated teller machines (ATMs), industrial automation and any other embedded device. It is based on the new Windows 10 technology with advanced lockdown capabilities, Win32 compatibility and universal windows app support.

As the system is based on the full version of Windows 10 it offers full compatibility for applications, apps and drivers (Universal Windows Platform). It is available for the 32-bit and the 64-bit architecture. As with previous versions, the new system will be supported by Microsoft for at least 10 years.

Windows 10 IoT Enterprise installation uses the same setup you might remember from several previous Windows Embedded operating systems via OPK (OEM pre-installation kit). This allows you to use the same known tools to install and deploy the operating system on the devices.  Once this is done the installation can be cloned onto other devices. It’s up to you pick either 32 or 64-bit installation based on your preferences. 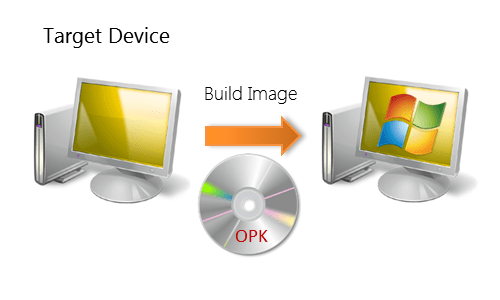 The Embedded Lockdown Features of Windows 10 IoT Enterprise offer branding options and protection for every cycle in the device runtime. The Unified Write Filter can protect the device from unwanted changes to the disk – whereas the Unbranded Boot, Embedded Logon and Assigned Access or Shell Launcher can help brand the device to a corporate design and hide the Windows logos completely. The Device Guard is the most secure way to protect a device at the moment.

The Embedded Lockdown Features can be used to secure a device or to make the Windows operating system completely invisible behind an application. The overview below shows you all Embedded features that are included in Windows 10 IoT Enterprise.

We recommed the Elbacom Embedded Configuration Manager to do the configuration of all these Embedded Features because you can save a lot of time and money with it. For more information please click here.

The Unbranded Boot feature makes it possible to suppress the Bootlogo, the Status Ring and the Status Text during the boot. This can be done one by one or you can also hide all together. If the device is an UEFI supporting device, it is also possible to change the Bootlogo in the firmware to our own one. There is the possibility to block the access to the F8 and the F10 menu during the boot. This prevents starting the recovery mode or booting another system or device through the bootloader. Another feature is that you can show a black screen instead of a bluescreen. But in this case the device will create a dump file for you in the background and the device will make an automatic restart so nobody can recognize the crash of the device.

One of the most important features in the embedded channel is the Unified Write Filter. This filter protects the hard disk from unwanted changes. If you activate this filter, new data will be only written in RAM and not to the physical hard disk. So all changes will not affect hard disk and will be gone after a restart. But in case, there is a file or a folder that must be updated on the disk, like a database for example, you can create exclusions for specific files or folder. There is also a servicing mode available that lets you update device with an activated filter. Servicing mode restarts the device into an unprotected mode. During this, the Unified Write Filter is deactivated and there will be a full-screen screensaver which you cannot exit. In the background your device will do all windows and application updates. When finished, it will restart again and the Unified Write Filter will protect the device again.

With the Shell Launcher, you can open a classic Win32 program automatically.  The Shell Launcher changes the classic desktop shell to another program. Additionally, you can configure what should happen if the program crashes or if someone closes program. In this case the device can do a restart or shut down. It can also just restart the device or do nothing. There is also the possibility to configure different shells for different users. That means that you can set up for example two accounts and use one account with your own program as shell and the other account with the classic desktop shell for administrative things.

The similar feature to the Shell Launcher for modern applications is the Assigned Access. This feature provides a direct boot into a modern application. There is also a way to hide notifications and you can block some touch or mouse gestures that are required for example to open the action center. There will be also some key combinations blocked but it is still possible to get out of the application by using a specific breakout key. The breakout will bring you to the logon screen if you press it five times in a row.

This feature helps you by blocking applications which you do not allow to run. You can configure this by creating a black- or a whitelist. You can allow an application to run for example by the path of the execution file, by a hash or you can only allow application from a specific manufacturer to run.

With the USB Device Policy, it is possible to protect your system from unwanted USB devices. There is a way to block a USB device based on the device ID.  You can also block devices based on a device class, for example all Bluetooth devices, or you can block all removable devices in general. The policy can be bypassed for administrators so they can still connect any device to the system during maintenance work.

With the Embedded Logon feature it is possible to hide the login screen completely if there is an automatic logon configured. This allows you to show an application right after the boot screen. The features also allow you to customize the login screen by hiding some elements.

With BitLocker you can completely encrypt your drive including the hibernation file and the pagefile.  There are different possibilities how to use the BitLocker on the device: You can store the encryption key in the TPM chip – then the disk will only work on this specific device. If someone removes the hard disk, it is completely encrypted. But in the device it will boot normally. Alternatively, you can also store the encryption key on a removable device. Then the device will only boot if the removable device is connected as well. BitLocker also supports entering a PIN during boot up – however this is not an embedded-friendly option, as the devices will no longer boot unattended.

All licenses Windows 10 IoT Enterprise are available as EPKEA and PKEA licenses.

PKEA: You will get a different Product Key for every single device.

Please Note: EPKEA Product Keys for the this product are no longer shipped with the runtime license envelopes. To request your product key please follow the steps at Product Key Information.

PKEA Product Keys will be written on the COAs. (License Stickers)

The license and pricing model will stay the same as it was with the previous Windows IoT Enterprise release. There are three pricing models: Entry, Value and High-End, depending on the processor the OS will run on. Microsoft regularly updates a processor list where you can find the latest processor models and define in which category they belong.

Microsoft has released the new Windows 10 IoT Enterprise 2016 LTSB version at the end of July 2016. The 2016 LTSB version is based on the Anniversary Update of the classic Windows 10 and includes some new embedded features in the IoT versions. Also the IoT version is now available with Current Branch for Business (CBB) servicing model allowing for more frequent feature updates. The CBB version also includes all standard applications from classic Windows like the Edge Browser or the Windows Store application. Also included are Cortana and Windows Hello.

The “Entry” SKU is for devices with a very low computing capability and CPU models like Intel Atom or selected Celeron and AMD E1, E2, A4, A6 or G-series. The “Entry” SKU has the lowest price, whereas the “High-End” SKU has the highest price. The “Value” SKUs price lies in between the two.